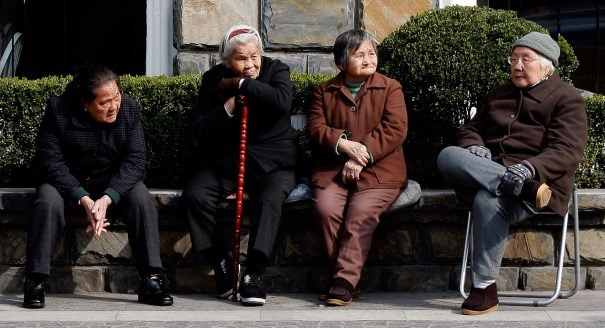 Over the past two decades, China’s population has been aging rapidly. As a result of China’s “one-child” policy and low mortality, the proportion of elderly citizens will continue to grow very quickly, increasing the stress on an already troubled health care system.

China adopted a one-child policy in 1979 in order to stem population growth and ensure economic stability. This policy prohibits couples from China’s ethnic majority from having more than one child. The policy did slow population growth, increasing access to vaccinations and to improved disease care and treatment. But with fewer children and improved living standards, the proportion of elderly in China’s population has grown substantially over the last 20 years. By 2000, China’s population ages 65 and older was almost 90 million, and the elderly could number well over 300 million by 2050. The cohort of oldest-old was 12 million in 2000 and, by 2030, could number over 40 million.

Growth of China’s elderly population is happening at a time of rapid increase in urbanization and industrialization, all of which have weakened traditional family support networks (Jackson 2010). Because of a limited institutional care system, China’s elderly have predominantly received care in the home; only 2 percent are institutionalized. The elderly living in institutions are more likely to reside in urban areas, have less access to family-care resources, and exhibit poorer health than community-residing elders (Gu, Dupre, and Liu 2007). Yet, according to Gu and colleagues, poor health is not the primary indicator of institutionalization. The elderly who remain in the community are able to do so primarily because they have familial support and care. But as the elderly population continues to grow and the availability of family caregivers decreases, more elderly with poor health will need to seek care in institutions.

Several recent studies have focused on analyzing the health and well-being of China’s oldest-old. Frailty, a word used to describe systemic deterioration in bodily and cognitive functioning at advanced ages, is typically more prevalent in the oldest-old population. However, frailty is not an inevitable result of living longer. A wide range of factors affects frailty. For example, the oldest-old in urban areas are more likely to suffer from frailty than those living in rural areas, possibly because of urban-rural differences in social support networks, the environment, and lifestyle. The oldest-old living in rural areas typically have better physical functioning and thus are less likely to develop symptoms of frailty than those living in urban areas. Gu and colleagues also found seemingly contradictory gender differences in frailty: Men usually die more often from causes related to frailty, while women typically have more frailty symptoms but are less likely to die from them. Overall, research indicates that using medical interventions and care to prevent and treat frailty among the oldest-old will be key to extending healthy life.

Childhood socioeconomic conditions may be linked to healthy longevity. Oldest-old men and women who received adequate medical care during a childhood sickness have a 17 percent to 33 percent lower risk of physical or cognitive impairment than those who did not get appropriate medical treatment. This study suggests that policies to improve current childhood socioeconomic conditions in China may increase the length of healthy life and eventually benefit the oldest-old. Higher socioeconomic status also increases access to medical treatments and reduces the mortality risk among the oldest-old. The urban educated oldest-old have a much lower risk of dying than the rural uneducated.

Cognitive impairment among the oldest-old also differs by gender. Among the oldest-old, women are much more likely than men are to suffer from cognitive impairment because of their lifetime disadvantages in socioeconomic status: Women traditionally have much smaller social networks and fewer opportunities for leisure activities than men have. Zhang suggested that future research is needed to determine whether elderly participation in social activities at home and in community centers could delay the onset of cognitive impairment. In addition, investments and policies that help close gender disparities in education could significantly improve women’s cognitive health in old age.

Data collected from the Chinese Longitudinal Healthy Longevity Survey in 2002 indicated that improved public health knowledge and new medical technology helped reduce disability among the elderly in the 1990s. But from a nutritional standpoint, health seems to have gotten worse. China’s adult overweight population is growing significantly; in 2004, almost one-quarter of all Chinese adults were overweight. This has serious implications for China’s health care system. The proportion of elderly who develop obesity-related diabetes and heart disease will increase, and the total medical cost for treating these diseases could reach almost 9 percent of China’s gross domestic product by 2025.

In addition, some research suggests a connection between childhood nutritional status and old-age mortality. Children who experience adverse economic conditions, exposure to diseases, and poor nutritional status early in life are more likely to have higher old-age mortality rates. Public investments in programs that promote healthier lifestyles and improved diets may avert exposure to these conditions in early childhood.

China’s rapid urban economic development in the past 20 years was accompanied by an increase in air pollution. The elderly are more sensitive to their physical surroundings and may be more vulnerable than younger adults to the health effects of environmental degradation and pollution. Research suggests that those elderly living in richer cities are generally more affected by air pollution than elderly living in poorer cities, because residents of these richer cities had greater chronic exposure to air pollution during urban economic development (Sun and Gu 2008). Zeng and colleagues also found lower rates of physical disability among the rural elderly, supporting the claim that air pollution has a greater effect on elderly health in urban areas. Reducing air pollution can promote outdoor activities and may protect against illness or declines in physical and mental functioning in old age. Policies that reduce air pollution—especially in urban areas—would not only positively affect elderly health but, in doing so, would also reduce medical costs and mortality.

The elderly in China usually rely on their families for support, in part because Chinese elderly are not likely to have pensions. Only 40 percent of elderly males and just 13 percent of elderly females receive any kind of support from a pension. The share of the oldestold population who rely on family for support is particularly high—about 71 percent of males and 89 percent of females. And the oldest-old who live in large households in urban areas are more likely to benefit from access to health resources than are the oldest-old living in large households in rural areas.

Currently, the percentage of elderly living in any kind of institution is very low, and the most common indicators of institutional living for the oldest-old are the absence of a spouse, few children, and the lack of proximity to living children. More research is needed to determine which solutions will best address the lack of available caregivers and are most likely to provide the elderly with appropriate health resources, including formal and informal care.

China is already struggling to meet the health needs of its people. Many of these difficulties arose during China’s economic transition from a centrally planned economic system into a market-oriented system. While the market system initially increased living standards, the rapid decentralization of public health and medical care systems in the 1980s has resulted in the neglect of public health services.

Both rural and urban Chinese residents used to have almost universal insurance coverage. But after the economic reforms in the 1980s, a city-based social health insurance scheme replaced insurance provided by cooperatives and employers. Vast numbers of rural and urban workers were no longer insured; even today, lowincome and rural households have the least protection. According to the 2003 National Health Services Survey, only 56 percent of urban residents and 21 percent of rural residents had insurance.

Insurance coverage varies across income classes in urban and rural areas. In urban areas, about 80 percent of people in the highest income quintile have health insurance, while in rural areas just 32 percent of people in the highest income quintile have it. Both urban and rural poor have similar low levels of health insurance coverage: 24 percent and 20 percent, respectively. In addition, very limited government funding keeps doctors’ earnings low. In order to make any kind of profit, doctors overprescribe drugs and high-tech services, making health care services largely unaffordable to uninsured poor and rural populations. The Chinese health care system also will have to respond to a disease burden that is shifting toward the aging population. About 60 percent of this burden is from noncommunicable diseases among adults ages 45 and older. By 2030, older adults will account for two-thirds of the total disease burden in China. The Chinese government has pledged about 1.5 percent of its total gross domestic product to health care over the next few years, and to provide basic health insurance to rural communities. In 2007, the New Cooperative Medical Scheme (NCMS) covered 86 percent of rural residents. China has also pledged to build a primary care system that would provide greater care in community centers and in homes. While all these changes are beneficial, Yip and Mahal predict that without reforms in the delivery system aimed at strengthening regulation, China will not fully reap the benefits of this additional funding and program implementation.